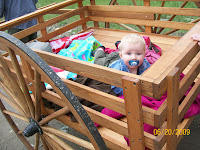 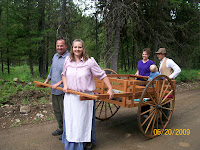 Our stake is doing a pioneer trek this summer in lieu of Youth Conference. Jim and I were asked to be on the Activities Committee for Trek months ago and have been meeting and planning and meeting some more for quite a while. Last Sunday, though, we were asked to step in as a Ma and Pa as several couples had to back out. We were thrilled to help out. We will have a family of 101-12 children as we trek about 25 miles over 3 1/2 days. Yesterday we went to a Ma and Pa Training in the area where we will be going with trek and got to pull the handcarts about 2 1/2 miles and made dutch oven stew and rolls--nothing beats cooking in the outdoors, but this was exceptional! Pulling the cart wasn't nearly as difficult as I thought it would be--except when we had to go down a hill, over logs and rocks, and then back up again. I made a pioneer skirt that I wore and it was great, except for when we were trying to push the cart up the hill. I kept stepping on my skirt! I'll have to think of some ways to remedy that before we get to the real deal. We also played games(my part of the planning :) and were well taught and instructed on our duties as Mas and Pas. We had a wonderful time with the other Mas and Pas and are really looking forward to Trek in July!

Not only was it a wonderful day of training, but right after we got there, Tanner actually took his first few steps all on his own! Since then, we have been prompting him to walk more and more on his own and he is doing great! He's such a happy kid, except when he squeals (it's high-pitched and loud!) and when four teeth are all trying to cut through at the same time (right now!)--poor kiddo! Here are his walking efforts from today.

Mary has been very busy playing volleyball this summer already. She participated in both the Glacier an Flathead High volleyball camps and on Friday, she played on the Flathead Varsity team at the Glacier Volleyball tournament. She did VERY well. Her team placed second, losing only to a team from Helena. Mary is a very talented volleyball player and we love to watch her play! Way to go Mary! 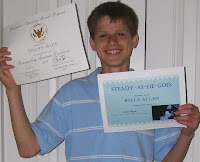 Billy finished the 8th grade at Kalispell Middle School on June 10 and was awarded the President's Award for Outstanding Academic Excellence. He did very well in school and worked hard to keep his grades up. I really enjoyed working with him, too, on assignments. I miss being in the classroom, so helping Billy out not only was enjoyable, but also helped curb my teaching 'fix.' Billy is a great young man and a wonderful son! We love him very much and are so proud of his academic accomplishments this year. He will enter academia in August as a Flathead Brave Freshman. He also starts seminary this coming year--lots of great excitement to come!
Posted by Allen Family at 11:00 PM 1 comment:

Amelie is such a character! Now that Tanner can walk with help, she gets her arms under his armpits and hauls him around the house. She even tried taking him up the stairs today while I was in the shower. She left him half way up--where I found him 5 minutes later trying desperately to get his chubby little legs up to the next step. She now knows NEVER to take him on the stairs and I am reminded that it is still safer to have Tanner in the bathroom with me when I shower (this was a first today.) But Tanner is really getting around. He walks along furniture and chairs and he crawls to get to more furniture and chairs. Eric was having a blast with him this afternoon as he ran to and from the couch, right around Tanner. The two boys were laughing and having a great time together. It was so fun to watch! Her is a clip of Tanner 'walking' with his walker.