Here is the link to watch the news report on Mary and her game last night. Just look for NewsChannel Sports 10/27/09 and click on the play icon. She was also in our newspaper in two pictures and led in digs and aces last night. Way to go, Mary!
http://www.keci.com/pages/4194460.php
Posted by Allen Family at 9:01 AM No comments: 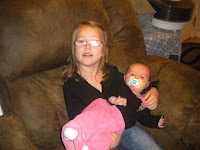 Jim and I had known for a month or so, but Mary and Billy were sure taken by surprise when Tiffany, her mom and her daughter Mckayli came to visit this past weekend. Mary was surprised at her volleyball tournament in Missoula. Billy got the shock on Saturday night. It was so neat to see Tiffany and be able to really visit with her--the last time we saw her was at her wedding, a week before she delivered Mckayli. So, there really wasn't much time to visit and we had yet to meet the newest member of the family. Mckayli is a doll and everyone took right to her, even Uncle Tanner. Any time she started crying, he would rush over as if to see what he could do to help her. He loved giving her kisses, as did all of us. Eric wanted to know every minute where Tiffany was. Amelie just wanted to hold her little niece and even called some of her kindergarten friends to tell them that her baby niece was here and that meant she was Aunt Amelie.
See my facebook for more pictures of our visit.
Posted by Allen Family at 12:16 AM No comments:

A lot of great stuff happened today, so I am just going to go through and report on it all.
This morning, I took the second day of Parisi speed school classes--it's the free intro week at the gym. It was a great workout--totally different from what I usually do. In fact, sometimes, when I am in step class (which I really do enjoy), my eyes will wander tot he clock and a curse a little under my breath that only 5 minutes has gone by and we 'get' to go through the routine one more time. But today, the Parisi class was over long before I thought an hour had truly passed!I am a little sore--my quads, my lats and delts. It's a great program!
Then, once I got home, as a light and wet snow fell, we said goodbye to Tiffany and Mckayli after having had a wonderful few days visiting with them. They were on their way to Missoula to watch Billy's last football game of his freshman year. It was a very good game--His team won 21-15 and he played pretty much the entire game. I have really missed watching the last couple games as they were all away in Missoula. I did help a few other moms help make lunches for him and his team the night before and that was a great opportunity! He is such a great young man. I am so thrilled that he did so well tonight. Now it is on to wrestling . . .
Well, after Tiffany left, Jim, Tanner and I headed to Eric's Joy School for the Halloween program. They sang a few Halloween songs and paraded in their costumes. They were so cute!! Eric is such a cute kid! There is nothing like it when just lately, every so often he will tell me when I am helping him do something, 'Mom, you are the best Mom ever!' It just makes my heart melt and makes me want to try even harder to be a better Mom.
Then, after work and Amelie's first Dentist's appointment and some Pampered business, Jim, Amelie, Eric, Tanner and I headed across town to Glacier High for Mary's last region game. Last time we played Glacier, it was at Flathead High and we lost in 5 very intense games. Tonight, we won the first two games fairly easily--we were ahead the whole time and there wasn't much worry. However, in the 3rd game, they rose up and it was close--27-25, I think, was the final score. So, going into the 4th game, I was already on edge and anxious. It was neck and neck the entire time. Finally at 22 a piece, we finished the game, set and match. Yeah!! It was thrilling. We may see them again next week for playoffs, too! Oh boy!! Thanks to so many friends who came out to cheer!
After the game, Mary was on a local radio that broadcast the game. It was her second time on the radio but first time live. Plus, last week, the Flathead Beacon did an article on her for their newspaper (see the link to read the article). As well, the news covered the game highlights and showed a dig and a hit by Mary!!! She is a superstar and we love her so much!! We are blessed with six truly wonderful children! They are by far, our pride and joy!

We should be able to post a link to the news report tomorrow~
Posted by Allen Family at 11:46 PM No comments: 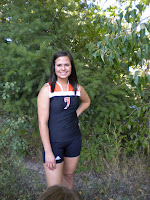 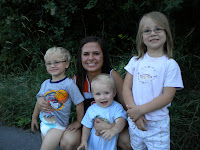 We really are so thrilled that Mary decided to live with us this year! She is such an awesome young woman and a tremendous daughter! She is so spunky and lovable that everyone has taken to her like paper to glue. She was voted co-captain of her Varsity Volleyball team and has truly shone on the court (and off). She is now being actively recruited by several colleges and it is so exciting. And with ample reason . . . she is Top Ten in three areas in the State volleyball stats: #1 in Passing, #9 in digs (a pass from a hit) and #9 in kills per game. She NEVER subs out and is just doing a phenomenal job on the court. She is a great athlete with drive and determination. I am so proud of her accomplishments and know she will succeed! Way to go, Maren-ens!
If you would like to check out some photos, go to mtmediaplus.com and find games with the Flathead Bravette's Varsity team. There should be some good ones against Big Sky. You can also see some of Billy playing football (Flathead Braves Freshman Team) against Missoula teams. This guy is good--
Posted by Allen Family at 7:50 PM 2 comments: