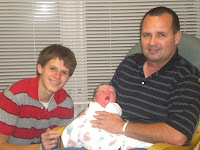 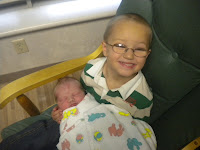 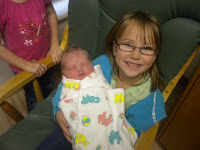 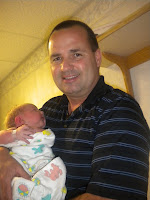 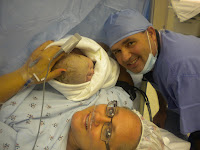 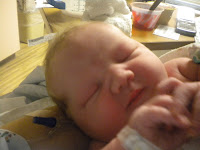 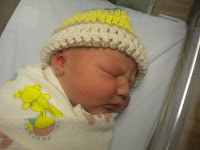 Yesterday, Ethan Philip Allen officially joined our family. Jim & I arrived at the hospital by 8am and were pretty much ready by 8:30am. But there was another c-section before mine AND no one could find the doctor's orders. Once they did, they had to draw more blood, put in another IV and match some blood just in case. So, finally around 11am, I got to walk down the hall to the OB OR. I got the spinal and before I could lie down, my toes were already getting numb! By 11:25 or so, they were cutting me open. Jim peeked over the curtain several times throughout the procedure to see what they were doing. I guess in a first c-section, once they cut, it takes only a few minutes to get to the baby, but by the 4th, it takes a little longer to get to baby--you have to go carefully through the scar tissue and avoid nicking the bladder, etc, until you get to baby. So, finally, at 11:56am, I heard the first little cry. And he was here. I could see, too, the doctor and nurse cleaning baby up. Jim went over and trimmed up his umbilical cord and got to bring him over to me. The first comments the doctors and nurses made were things like, 'Look at all that hair!' 'What a big head,' and 'He's a big boy!' Even with the last comment, both the pediatrician & the OB guessed baby was about 9lbs. Well, the scale shocked us all with a weight of 10 lbs 3 oz. Whoa! And 22 inches! Alright, NFL, here we come--just kidding, sort of :)
I got to hold baby shortly after that and his little tongue was just a going. I asked the nurse if I should nurse yet and she said, nah, just wait until we got back to the room. But after about 15 minutes and feeling his strong sucking grip on my finger, I asked again and she said that I could if i wanted to, so we did and boy, he latched right on and ate! He was certainly ready! He nursed all the way back tot he room and for another 30 minutes after that, too.
I was a little sleepy and sore (duh!) but so thrilled. Baby cried a bit, but also had a calm spirit about him--and since, he has only cried a few times--when I'm changing a poopy diaper, when they poked his heel (to test his blood sugar levels--which, by the way, all three were great readings, so he is out of danger of diabetes--yeah!!!-- and when I wait too long to feed him--only because I have to go to the bathroom, . . .
He has slept both days from about 2pm until 6 pm or longer and then wants to stay up all night. Fun, fun! But he is a doll--so cute and so cuddly. He croons and coos in his sleep. He's wide-eyed at 11pm at night, but not so much during the day. He does have a lot of hair--light, though, just like the others, His eyes are still blue, so we'll see if that lasts or not. He's a real keeper.
In fact, when Amelie, Eric and Tanner came up to the hospital yesterday to meet their new little brother, Eric told me 'We're going to be really nice to Baby Ethan and not be mean to him' And then, he told me, "He is SOOO Cuute" And I asked him if that was a good thing and he said, "Yes, that means we'll keep him" So fun. Tanner, today, was enthralled with Baby Ethan-'that's OUR baby Ethan,' he said. and as he left, he called back, "Love you, Baby Ethan!" Amelie's little first grade class sang Happy Birthday to Ethan yesterday and today, they sent with Amelie a little book they wrote called "Everything You Need to Know about Babies" Each classmate completed the sentence "Babies need . . . " and drew a picture. And the last page is Amelie's, which reads, "I am the very best at big sisters", Said Amelie. and she drew a picture of her holding Ethan in her arms. Wow. How could that NOT bring tears to my eyes! We are so glad Ethan is here safe and sound and are so thankful he has joined our family. He isa definitely a keeper!
Posted by Allen Family at 8:56 PM 4 comments:

Tomorrow at 8 am Jim and I reprot to the Maternity wing for the fourth and final birth of a little baby Allen. We'll let you know tomorrow afternoon how everything went and all the details of baby Ethan's arrival. We're still debating middle names, but Ethan is here to stay :) It's hard to believe I have only a few more hours of pregnancy ever. Sad but exciting, too, as we prepare to welcome one more little spirit from heaven to earth.
Posted by Allen Family at 5:22 PM 5 comments:

Here is a link to the article that tells about the Timberwolves Volleyball season commencement successes. Mary played libero all week and did a tremendous job!!

Just click on the word SHARE to view the article (I think).
Posted by Allen Family at 6:29 PM 2 comments: