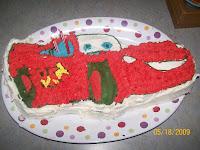 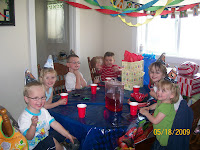 Happy 3rd Birthday, Eric!
Eric is a vivacious, charismatic, moody, hilarious, talkative, cuddly, loving and wonderful little boy. He is trying to grow up fast to catch up to both Amelie and Billy. In size, he isn't doing so well--the doctor thinks something is going wrong in his little body as he only grew an inch in an entire year and fell from 95th percentile to below 5oth in just one year. I try not to worry too much, but it is bothersome as we impatiently wait for lab results...but that wasn't where I wanted to focus my attention on this post.
Eric is a fast learner. He LOVES to pray to his Heavenly Father. He loves nursery and playgroup and being with friends. He'll talk your ear off if he isn't pretending to be shy or in a bad mood.
Right now, Eric loves Cars. he was all into pirates until about a month ago when he suddenly switched his attention and efforts to cars. So, we did a Cars birthday. I am not artistic, so to decorate the Cars Lightening McQueen shaped cake that we borrowed from some dear friends was a nightmare and stressor--I think I yelled a few times at the kids, only because I was feeling so unskilled as I tried to get the icing to go where it was supposed to, etc. But it all worked out and Eric recognized it, so that's all that counts. We had some friends over, played games, ate cake and ice cream and had a blast. Eric is certainly a blessing in our family and we are so thankful for his loving nature and wonderful hugs and kisses. Happy Birthday, little man!
Posted by Allen Family at 11:04 PM

I think it looks pretty good. I would have opted for the easy out with a square cake and a printed picture on top. :)