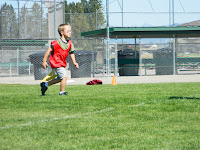 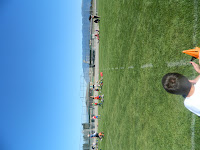 Not only are the kids in school, but fall sports are back in swing. Billy is running on the crosscountry team and enjoying that a great deal. He has run all over town and tells me that the team knows where all the best fruit trees are, so they grab a pear of plum as they run by. Fun! Eric started flag football yesterday. Last year, he cracked us all up as he would run the other way or not know at all what was going on. This year, he is getting it a little better. Of course, on his one run with the ball, I was chasing Ethan (he was attacking a little girl the entire time--I think he just wanted to give her hugs, but at his ability, he holds on more for balance and, well, he scared her off, poor kid). I may have one picture of it, but he did a great job running through the crowd, but right after someone grabbed his flag, another opponent, obviously not aware of the rules of FLAG football totally took him down. Coach carried him off the field and called out, probably for my sake, 'He's okay!' Amelie and Eric start cross country themselves in a week or two, then basketball. Finally, Mary is into her 2nd college season of volleyball. They won their tournament this weekend in a 5 set victory against the team they play on Wednesday at home. She played a lot of right back this weekend and I think she single-handedly kept her team in the game with her positive and upbeat attitutde. She is definitely a captain and a leader.
Posted by Allen Family at 1:49 AM

We are super busy with soccer at our house. We love sports too but it sure can be difficult getting everyone to all of their games and practices!

It was great to get your Christmas card and see all the things you are doing and your family growing up so fast.

It would mean a lot more if Jim would call once in a while, return a phone call, or act a little more kind towards his siblings and parents.

After all, what is Christmas if you remain aloft--sadness.

What is the Church about--if you hold grudes and don't forgive.

Happiness is growing beyond hurts which we all have.

Just a thought to consider before sending next year's Christmas card. After all it begins with Christ not Anti.

Still love you Jim and always will.

P. S. The guy who called you many years the greatest young kid in the world and who sneaked in the back seat and said "surprise," half way to the beach.