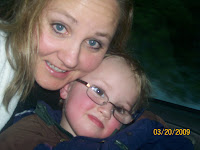 So on Tuesday while I taught Amelie's joy school about the joy of trying new things (we made kites, ate green eggs and ham and tried somersaults, and learned about diamonds and the letter V), Jim took Eric to an eye doctor appointment. He stands so close to the TV that despite the objections that it may just be a kid thing, we figured we were better safe than sorry. He had no signs like Amelie did (she would go cross-eyed when eating), except for standing too close to the ole boob tube. Jim returns 2 1/2 hours later with Eric porting some cool plastic sunglasses. Sure enough, he needs glasses. I guess he is as blind as Amelie--far sighted. I may have horrible eyes, but I am near-sighted. That is the entire opposite problem, so it couldn't be my faulty eyes that I am passing on to my children, could it?
Some time next week, we will get Eric's glasses in and see how he reacts. Jim picked out the frame all on his own and chose the same ones our friend's little four year old has :) He did a great job and we will post pics of our new four-eyes as soon as he gets them.
Posted by Allen Family at 10:49 PM

That's crazy! I can't believe both of the kids have the same eye problem. Did you ask if it something passed on genetically? I assume it would be somehow. You can always blame it on Jim since he doesn't know his background right?! Just kidding! Eric will be so cute in glasses!

I wasn't there at the appointment to talk to the doctor, but it must be something genetic. It is most likely through me--otherwise at least one of the older kids or Jim would have some signs of eye trouble. They all have perfect 20/20 vision--thank goodness. I assume now, we will need to take Tanner in soon--just to be sure.