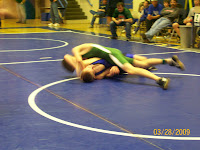 Billy is such a wonderful young man! He has done some tremendous things lately. First, he made honor roll again for the second trimester's report. He has been working hard this year to keep his grades up to all A's and B's and has done just that--in fact, they are mostly all A's. It is awesome! We just got the listing in the newspaper, too, so we cut it out and it is hanging on the refrigerator right now in his honor. Way to go, Bill-Bill!
Billy had his last wrestling competition today--State Wrestling Championships. He wrestled in 3 of 5 possible matches and got his first pin of the season!! He's won on points, but hadn't pinned anyone yet this year. That was awesome. I was sitting at the top of the second set of bleachers--very high up-and Jim was kneeling by the mats--I could hear Jim's cheering as clear as day. We are all so thrilled for Billy, for the time and effort he puts in to learning and practicing to achieve these wonderful accomplishments. We love you, kiddo!
Posted by Allen Family at 3:24 AM