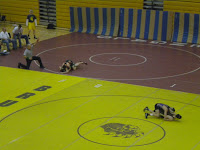 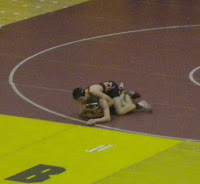 Billy loves wrestling. And despite how awful it is to watch him not eat as we think a growing teenage boy should, it has been so fun to watch him and cheer him on. Each year he keeps getting better and better. Last weekend we traveled to Helena as he competed in Divisionals, which also seeded him for state. He won three of five matches and came in 5th in his weight class of 119 (a much better placement for him than 112, where he wrestled much of the season). He did great and advanced to State this weekend in Great Falls. However, things did not go in favor of the defending State Champs. Billy tried hard but lost his first two matches. Then he had to watch as teammate after teammate lost out. Even those favored to win, who won State in their class couldn't repeat the performance again this year. It was someone else's turn to win. We are so pleased with Billy's progress this year and can't wait to watch him next year! Way to go, Bill! We sure love you!!!
Posted by Allen Family at 10:46 AM

Congratulations Billy For going to State!!! You're AWESOME!!!