Words of a two year old 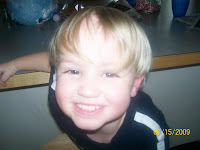 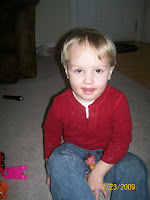 I have to tell you that life with a two year old boy is never dull. He dresses up as either superman or a pirate. (He thinks he is Captain Jack Sparrow even though he really has no idea who that is.) He lugs around the two pirate sets of toys he owns and says Argh! He'll take on anyone in a sword fight. And with his cape on, he carries around the superman figure he got as a baby and cries, 'Superman to the rescue!' before darting off to save the world.
But what is even more entertaining are the phrases he picks up on and uses. I told him what was for breakfast one day and he obviously did not like what I had said because he folded his arms across his chest and stated emphatically, "That is impossible!"
One night while eating dinner, he turned to me ans said, "Thanks for dinner, mom. It is delightful!"
Tonight, I insisted that he eat his dinner before he got dessert. He, of course, did not like that and told me, "Mom, you are driving me nuts!" Sadly, I am pretty sure he heard that one from my lips :(
He is so smart and funny and all boy--we are so glad he is a part of our family.
Posted by Allen Family at 7:43 PM

It sounds like Eric and Ben need to live next door to each other. Ben thinks he can tackle me to the ground any time of the day. He brings me bugs, sticks and rocks as if they were the neatest treasures he could possibly find (he has even brought me two live bumblebees - don't ask me how he did that one!) and he and the dog wrestle as if they were brothers. So fun! Eric is a cutie, I can't believe how much he has grown.