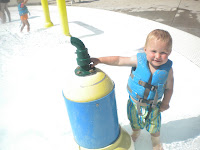 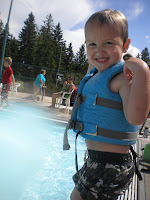 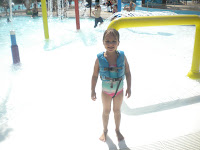 The other day for playgroup, we went to the waterpark in town. I had the kids so psyched up for it, they even spent the morning cleaning their rooms so they could go (I finally found a motivation that worked!) Tanner kept saying "waterpark! Waterpark!" all morning and wasn't content until his swimsuit was on. Eric and Amelie were just as excited to get there. Amelie had been given a coupon to get in for free from having helped her kindergarten teachers with somethign in class, so I had one less child to pay for, too. That was a nice break, though it really isn't very expensive. We were there from about 12:30-4pm and had a blast. Eric and Amelie played together so well in the water. They were tackling each other and leading each other around in the kid's pool, which is pretty impressive--it goes from nothing to about 2 feet deep with LOTS of water spouts and inventions spraying water or shooting water up, etc. Even Tanner loved it. The pool provides lifejackets that the kids wore the whole time. With the help from a friend, we even went in the lazy river. The kids sat in a big inner tube while I held onto the tube and walked along with them around in a circle. Tanner wasn't so sure about the waterfall (it actually reminds me of the icing machine that the donuts pass under at krispy kreme--there's no escaping it!) but we made it fun. Amelie even 'swam' around the lazy river one entire loop! And of course, they played with their friends as they swam. It was a great adventure and despite the use of sunblock, we all came home with rosy cheeks :)
Posted by Allen Family at 2:44 PM

That sounds like so much fun! Your kids are getting so big! So cute!

Thanks--as asre yours. I thoroughly enjoy following your blog!